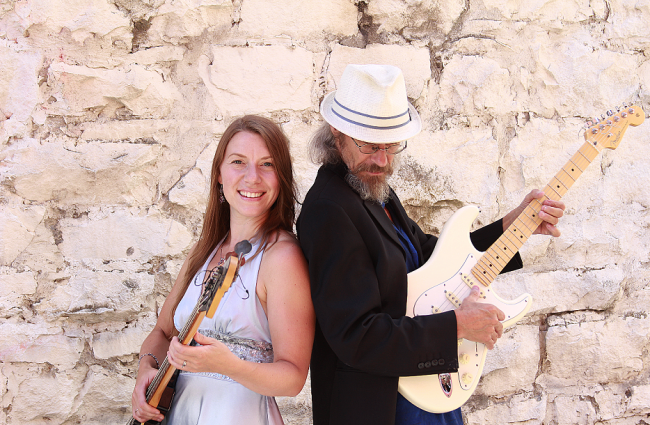 The world is flowering with chords, lyrics, beats and rhythms on the kind of all-purpose projects that steal one's breath away. I've been noticing exotic ports-of-call on return addresses of parcels I pick up on a daily basis. Blues duo Holly Hyatt and Jon Burden are from Vancouver, British Columbia. Jon Lundbom & Big Five Chord, out of Austin, have released their fourth EP this year. Little Johnny Rivero comes to New York City from Puerto Rico. Tami Neilson plies her trade in New Zealand. Carol Bach-Y-Rita's music is soaked in a Brazilian veneer and the genre-busting Parker Abbott Trio out of Toronto steals the show. Let's proceed.

Singer-Songwriters Holly Hyatt and Jon Burden have been recording and touring as an acoustic blues duo in their native Canada but on their third CD, Shufflin' The Blues (Flood Plane Records), they step up their game by going electric for five of nine, plugging in their instruments (her bass and his guitar), adding drums and rampaging through "Blow Wind Blow" by Muddy Waters, Memphis Slim's "Mother Earth Blues," "Left Handed Soul" by Nick Gravenites and CD highlight "Come On In My Kitchen" by Robert Johnson, who wrote the song in 1936. Scads of singers have sung it since but Holly and Jon really tear it up to add something new.

The fourth and final 2016 EP by Jon Lundbom & Big Five Chord on Hot Cup Records is out wherein the guitarist leads his quintet through prog-rock ("Utile"), bebop ("McGuffin"), minimalism ("Ghost Tattoo") and, like the first three EPs, a closing Ornette Coleman cover ("Enfant"). Alto sax man Jon Irabagon-who positively dazzled last year as part of Barry Altschul's band on the heavily recommended Tales of the Unforseen-is equally dazzling here. Austin guitarist Lundbom has already let his inner rock star out on 2014's Liverevil and 2015's Jeremiah. It's been 30 years and counting for Big Five Chord. May they rumble and ramble on for another 30 if just to hear bassist Moppa Elliott pluck his way through another crazy solo and tenor sax man Balto Exclamationpoint squeak, squawk and spit out the kind of breathy asides that just make everything else sound even better.

There's something about how the underlying percolating percussion is in full swing to the point where you can pick out the timbales from the congas and the bongos from the variety of the small hand-held percussive sound-makers, all of the aforementioned played and co-produced in exquisite detail by Little Johnny Rivero. Music In Me, his self-released second CD, combines New York City with his Puerto Rico home town of Isla Verde. This reporter has spent many a moon in Isla Verde, smoking a Cuban and grooving to the house band at the big resort there where women dress to the nines and men twirl them around the dance floor. This record brings me back. Trumpeter Brian Lynch (who knows his way around Afro-Cuban and hot salsa claves) shares the front line with the alto sax of Louis Fouche in Rivero's core band but guests on trombone, violin, chant vocals and more make this the Latin action of the year! You got your mambo ("Little Giants"), cha-cha ("Palmieri, Much Respect") and funk ("Afro Rykan Thoughts") but it's the salsa that tastes so hot!

The Parker Abbott Trio's Elevation has these Toronto-based adventurers expanding the already diverse worldview that they achieved on their last project, The Wayfinders. Picture two keyboardists-Teri Parker and Simeon Abbott-wrestling it out with piano, synthesizer, organ, melodica, all backed by drummer Mark Segger. No holds barred...anything goes...electric...acoustic...modern jazz...classical...progressive rock...classic swing and bop...avant-garde, it's all here on 11 tracks in a svelte 49:56. Highly recommended!

If you go and visit Carol Bach-Y-Rita at Minha Casa/My House on Augula Records, you will be amply rewarded by her high-flying Brazilian Bebop. The dancer-turned-singer turns standards inside-out and writes originals that are so good, they'll be standards of the future. She and her Jazz Bliss band of guitar, piano, bass and percussion tears open Joni Mitchell's "The Dry Cleaner From Des Moines" to reveal its glistening innards and, with surgical precision, takes it apart and puts it back together again...as a samba reggae. Ditto for Dizzy Gillespie's "A Night In Tunisia." She makes Cole Porter's "You'd Be So Nice To Come Home To" into an Afro-Peruvian folk song. I wouldn't mind being her next-door neighbor as she writes and sings about "Gardening With No Pants," a voice/percussion duet with guest Dudu Fuentes, one of Rio de Janeiro's leading percussionists.

Canadian singer/songwriter Tami Neilson's Don't Be Afraid (Outside Music) is a welcome delight. She may be living in New Zealand now but this is Americana at its finest. The title song was started by her musician dad who passed away before he could finish the song. Tami's country roots-as demonstrated on her Dynamite album-are subsumed by a soul aesthetic this time out as she found herself listening to a lot of gospel music. With vocals inspired by Mavis Staples, Tami has let it all hang out...and it works. Her songs sound good in any genre.